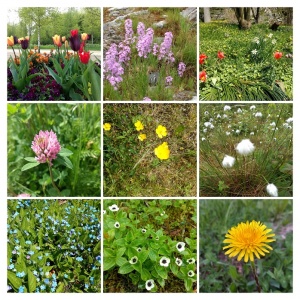 Lilja (Faroese, Icelandic and Swedish) and Lilje (Danish and Norwegian) are the Nordic versions of Lily. All variants are very popular in the Nordic countries at the moment. The Sami form is Liljá.

Vuokko is the Finnish name of the anemone flower. In the early 20th century it was occasionally used as a male name as well.

This is the North Greenlandic name for the broad-leaved willow herb (Lat. Chamaenerion latifolium). Common English names are 'dwarf fireweed', 'alpine fireweed' and 'French willow'. The word stems from the Proto-Eskimo pangerun + nar (-naaq) = paatingasut = 'those which resemble kayak paddles'. The older spelling is Pângnâĸ.

Linnæa borealis is the Latin name of the twinflower (flower). It was named after the Swedish botanist Carl Ingemarsson (born 23 May 1707), who named himself Carolus Linnæus on his journeys, Linnæus being a Latinisation of the Swedish word lind = 'linden tree' (see LIND). When he was ennobled, his last name was changed again: Carl von Linné.

In Sweden, every province has got its own 'province-flower' (landskapsblomma), and linnæa borealis is the flower of Småland, which was Linnæus' home landscape. Spelling variants include Linnæa, Linnéa, Linea etc.

This is the Finnish name of the 'forget-me-not' flower. It literally means 'sweetheart', 'darling', a diminutive form of Lempi, which means 'love', 'lust'.

Niviarsiaq is the Greenlandic name of the 'Rosebay Willowherb' (Lat. Epilobium angustifolium).

It literally means 'young woman or girl, maiden, girl of marriageable age' which is a combination of Niviaĸ and -siaq = 'acquired as'. The older spelling is Niviarsiaĸ and a short form is Nivi, which means 'girl'.

This flower was named for the Swedish botanist Anders Dahl (1751-1789). The name is used in many other countries outside the Nordic countries as well.

In Iceland, name combinations with rós = 'rose' are very common. The most popular one is Sigurrós. The first element of the name is SIG which means 'victory'.