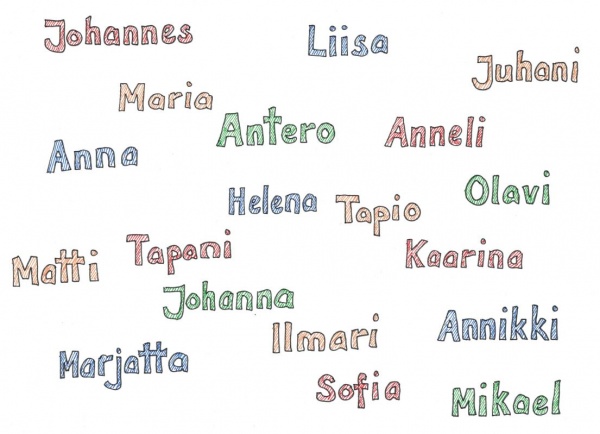 The most common Finnish names are

Quite interestingly, there is no originally Finnish name amongst the most popular female Finnish names: Maria derives from a Greek form of the Hebrew name מִרְיָם (Miryam) of Hebrew or Egyptian origin. Helena has Greek roots and Johanna Hebrew roots. Anna, Anneli and Annikki all derive from the Hebrew name חַנָּה (Channah). Kaarina is a Finnish form of the Greek name Αικατερινη (Aikaterine). Marjatta is a Finnish form Margareta, another Greek name with Persian roots. Liisa is a short form of Elisabet, another Hebrew name, and Sofia is yet another Greek name. In all these names you can see the long tradition of Biblical names and Saints’ names used in Finland.

There is much more variety in the male top names. There are Finnish forms of Hebrew names (Juhani, Johannes, Matti, Mikael) as well as Finnish forms of Greek names (Antero, Tapani) on the list, but you find also names from the Finnish mythology (Tapio, Ilmari, Kalevi) and also a name with Old Norse roots, Olavi.