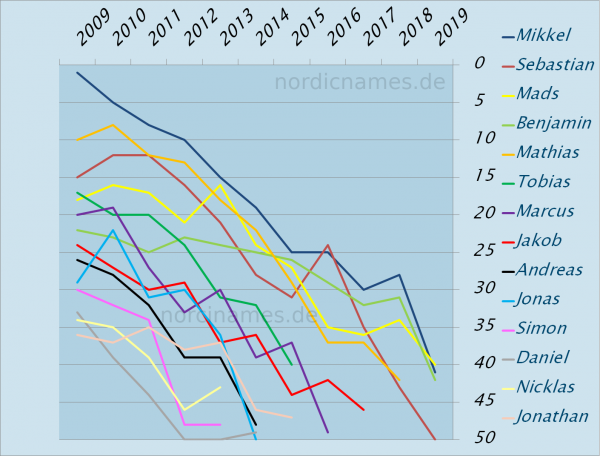 A lot of Biblical and Saints’ boys’ names are in a nosedive in Denmark at the moment. If you look at the statistics of the last 10 years, a certain type of name is declining strongly: Boys’ names from the Bible and Saints’ names. There are exceptions like Lucas, Noah and Aksel which are still among the top 10 and Elias which is consistently among the top 20 and Adam in the top 30. The other names, however, fall significantly in popularity:

Deep falls within a few years

Mikkel, the Danish form of Michael has been very popular 10 years ago. Still No. 1 in 2009, the name fell off significantly year after year and at the moment it just happens to be in the top 50, but in one of the next years it will probably disappear from the statistics.

Names which completely fell out of the top 50 are Nicklas, Simon, Daniel, Andreas, Jonathan, Tobias, Marcus, Jakob and Mathias.

Sebastian, Benjamin and Mads still join Mikkel at the bottom of the top 50 at the moment but it looks as if they will disappear in the next few years as well.

Looking at the current Danish top 10, the popularity of English names with Germanic roots is significant. Also other Germanic names like Carl, Malthe and Valdemar are popular at the moment.

Lucas – Greek name, author of the third gospel and Acts in the New Testament

Noah – Hebrew name from the Bible

Aksel – Danish form of the Hebrew name Absalom from the Bible

Names on the rise

Some of the names which are currently rising are Theodor, Loui, Otto, Theo, Lauge, Nohr, Elliot, Viggo, Arthur, August.

Biblical names on the rise are Adam and Elias.

Have a look at the Danish statistics lists through the years!