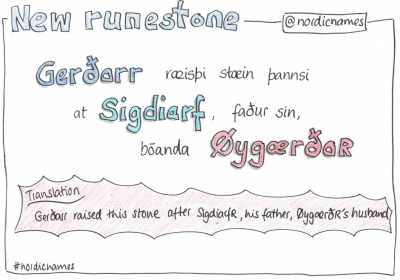 The stone is probably dated to the first half of the 11th century. The text reads:

As most runestones, this one containes Old Norse names. In this case there are two male names and a female name written on the stone:

is the name of the person who errected the stone. The male name is a combination of either Ancient Germanic *gerðan = 'remade, reconstructed' or GERD and HER.

is Gerðarr's father. It is for him the stone was raised. It is a combination of SIG and DIARF.

is SigdiarfR's wife. Her name, on the stone written in the genitive form ØygærðaR, is a combination of EY and GERD.